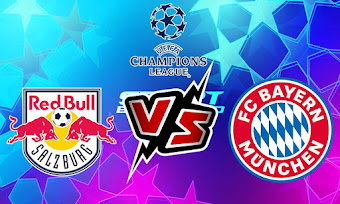 94th min: Full-time. That's a heartbreaker for Salzburg, who had the game by the scruff of the neck in the first half and really ought to have made the most of a string of opportunities. Bayern's first-half performance was poor but picked up somewhat in the second; Kingsley Coman put in a good display to notch that very, very late equalizer.

Oh, and who else but Coman? He's unmarked at the far post because everyone is watching Lewandowski, and he slots it past Kohn.

83rd min: Yellow card for Coman due to his vicious hack at Capaldo's shins.

80th min: That was almost a second Salzburg goal! Adeyemi's run down the right is saved well, and it falls to Adamu in the centre of the box, but Pavard is there to throw himself in the way of the shot.

76th min: This is such brave goalkeeping from Kohn, a great save from Sane's shot leaves the ball at Gnabry's feet, and the goalkeeper throws himself on top of the ball before he can get a shot away.

73rd min: Again it's Coman jinking his way into the box, leaving Kristensen confounded, but Kohl makes the save. From the corner, it drops to Sane, who volleys high over the bar.

72nd min: Coman on the left tries to tap it back towards Muller and yet again it's Ulmer who gets in the way and clears it.

68th min: Ulmer continues to rally his troops and leads by example defensively. Gnabry and Coman are giving Bayern some width at the moment but the final ball has not been there.

63rd min: Coman cuts it back to Pavard but Ulmer is on hand to make the clearance. Everyone is firmly camped out in Salzburg's half at the moment.

60th min: Muller brushes into Wober in the box and falls to the ground, but referee Oliver is not interested in awarding a penalty, much to his chagrin.

57th min: Bayern is definitely dominating the match now, with the bulk of the possession and pushing forward. Salzburg is coping well with it, though, and waiting for a chance to break.

52nd min: Great little run from Coman, dinking the ball over the head of Kristensen and then his powerful shot is blocked by Solet.

47th min: Another off-target effort from Coman, who's trying to get things moving down the left.

46th min: The second half has begun. Can Salzburg hold on to this important advantage? And can Bayern continue to play quite so badly?

45th min: Half-time. Bayern Munich have not played well, and RB Salzburg are good value for their one-goal lead. They're playing efficient, direct football and putting the pressure on a wobbly Bayern back line.

44th min: Adeyemi is rolling around in the box following Pavard's swung leg. VAR checks it over - no penalty. There does seem to be contact but he did make ground quite easily.

40th min: Consecutive shots from Muller and Gnabry are blocked, and Kingsley Coman then heads tamely into the arms of Kohn.

29th min: Bayern are trying to stroke some passes around and retain possession.

24th min: A fingertip save from Ulreich, demonstrating quick reactions after Aaronson gets a left-footed shot off.

And it's the Salzburg substitute Adamu, who's only been on the pitch for ten minutes! Good long ball forward down the right and Adeyemi works it through to Aaronson. He taps it to his left, and Adamu smashes it first time into the roof of the net. Tremendous finish.

19th min: Bobbling shot from the edge of the area takes a couple of deflections on its way through but Kohn dives on it and smothers it.

16th min: Nifty little free kick from Seiwald, sent out to the right, but the flag is raised for offside pretty quickly.

15th min: Sane is trying to get things moving for Bayern down the right side as they look to assert themselves. Every attack from them is met by loud whistling from the Salzburg fans.

12th min: Pause in play as Okafor receives some treatment and ultimately walks rather gingerly out of the match. He's replaced by Adamu.

8th min: Ulreich is being tested early, opting for a weak punch rather than claiming the ball directly, which won't fill him with confidence.

5th min: Adeyemi is very lively for Salzburg in these opening exchanges, causing all manner of problems on the flanks.

3rd min: Bayern are looking a little shaky at the back and vulnerable on the break - they've already had to put in a last-ditch block.

1st min: Referee Michael Oliver blows his whistle and we are under way.