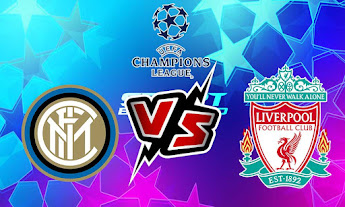 FULL TIME: Liverpool show their class in the final stages as Firmino's fine header broke the deadlock and Salah's close range finish wraps up a 2-0 first leg win for Klopp's side in Milan

90th Min: Three minutes added on as Federico Dimarco comes ON and Bastoni goes OFF.

Alexander-Arnold's cross is kept alive in the box by van Dijk and Salah steers the loose ball past Handanovic!!!

81st Min: Inter are not giving up on this game, as a sliding block from Thiago presents Perisic with a chance but his strike flies over the bar.

79th Min: Liverpool want a second goal as Keita knocks down Salah's floated pass but Skriniar gets back to tackle Diaz.

Robertson whips in a near post corner and Firmino gets away from his marker to glance home a superb header!!!

73rd Min: Another Calhanoglu corner is delivered in but Dumfries heads over the top.

71st Min: Vidal releases Dzeko in behind, but he gets caught in two minds, and Alexander-Arnold recovers to concede a corner.

70th Min: First change of the night for Inter as former Arsenal and Manchester United star Alexis Sanchez comes on for Martinez.

66th Min: Diaz wins another corner from Skriniar but Robertson's set piece is cleared away.

63rd Min: First chance of the second half for Liverpool as Alexander-Arnold posts a pass into the box for Diaz but Skriniar gets back to cover and concede a corner.

61st Min: Dzeko breaks in behind and slots past Alisson but the flag is immediately up for offside against the Bosnian.

Klopp rolls the dice for the final 30 minutes - Elliott, Mane, Fabinho all head OFF with Naby Keita, Jordan Henderson and Luis Diaz ON for Liverpool.

52nd Min: More pressure from Inter as Vidal tries to chest down to Martinez inside the box but van Dijk gets back to clear. But the hosts come again as the Argentinian is INCHES away from connecting with Perisic's whipped cross.

50th Min: Inter have started the brighter of the two sides at the start of the second period with Marcelo Brozovic dragging a long range effort wide.

46th Min: We are back underway in Milan!! Roberto Firmino is ON with Jota taken OFF by Klopp at the break.

HALF TIME: An even first 45 minutes in Milan with the key chance falling to Calhanoglu who rattled Alisson's crossbar.

45th Min: Two minutes added on at the San Siro.

44th Min: Dzeko looks to break in behind but Virgil van Dijk cruises back to recover and snuff out the danger.

40th Min: Calhanoglu arrows in a corner but Skriniar heads wide under pressure from Mane.

38th Min: Liverpool finally get a break inside the Inter Milan box but Mo Salah is denied by two sliding defenders. Alexander-Arnold's corner is cleared away by the hosts.

29th Min: Alexander-Arnold whizzes a free kick just wide of the Sami Handanovic's post. Stefan de Vrij is down receiving treatment and there is a stoppage in play.

21st Min: Liverpool press Inter on the edge of their box and win a corner which Mane acrobatically volleys wide

Ivan Perisic breaks in behind Trent Alexander-Arnold, and finds Hakan Calhanoglu inside the box, but the Turkish international fires against the crossbar with Alisson beaten.

15th Min: First chance for Liverpool as Andy Robertson's deep free kick finds Sadio Mane at the back post but the AFCON winner heads wide of the post

8th Min: Mo Salah springs into life and forces Liverpool's first corner of the night. Inter struggled to clear their lines as Thiago Alcantara eventually volleys over the top.

Denzel Dumfries nicks possession on the edge of the Liverpool box and Lautaro Martinez hammers one just wide of the post!!

1st Min: KICK OFF IN MILAN